Interested in being an NCAI Sponsor? Please fill out our Sponsorship Form. For information regarding Sponsorship please contact Bernida Humetewa at bhumetewa@ncai.org. 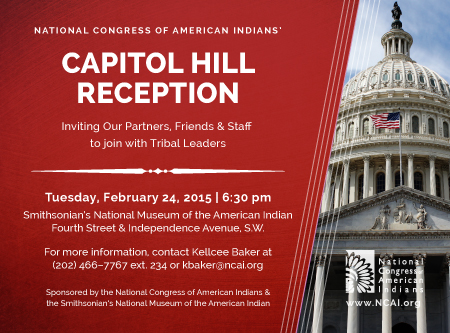 For assistance in scheduling a Hill Visit please contact Cesareo Alvarez at calvarez@NCAI.org.

Congressional Leadership Award
U.S. Representative Devin Nunes
Representative Devin Nunes has served in the House of Representatives since 2003 and currently represents the 22nd District of California. Time magazine named him one of the rising stars of American politics, in their list of “40 under 40” and he has been a great friend to tribal nations. In this last year he was particularly successful as the lead sponsor of H.R. 3043, the Tribal General Welfare Exclusion Act, which was signed into law at the end of 2014. The passage of this law was a great victory for tribes because it prevents the IRS from taxing the programs and services provided by tribes to their tribal members. The new law is also notable because it specifically requires that it be interpreted in a manner that is deferential to tribal government decision making. Representative Nunes is also notable for working across the aisle with his Democratic counterparts to get the legislation completed.

Governmental Leadership Award
Jodi Gillette
Jodi Gillette, a citizen of the Standing Rock Sioux Nation, has been a consistent presence throughout the Obama Administration – advancing our nation-to-nation partnership and ensuring the priorities and concerns of tribal nations are included in the work of the federal government. Jodi served from the very beginning of the Obama Administration as Deputy Associate Director of Intergovernmental Affairs and Associate Director of Public Engagement. She then served as Deputy Assistant Secretary to the Assistant Secretary-Indian Affairs for Policy and Economic Development in the U.S. Department of the Interior before returning to the White House to serve as Senior Policy Advisor for Native American Affairs. Recently Jodi was elevated to the role of Special Assistant to the President for Native American Affairs. She played a key role in the White House Tribal Nations Conference in 2009 and 2010 and has been instrumental in the work of the newly formed White House Council on Native American Affairs.

Special Recognition Leadership Award
Robert Burnette
Robert Burnette has been a long-time supporter of the work of NCAI, securing funding for key NCAI priorities including the Native Graduate Health Fellowship. His ongoing partnership has been critical to NCAI’s capacity to engage with a range of private sector and individual donors to support core elements of our work.

Native American Leadership Award
Suzan Harjo
Suzan Shown Harjo (Cheyenne & Hodulgee Muscogee) has been the President of The Morning Star Institute since its inception in 1984. She served as the Executive Director of the National Congress of American Indians from 1984 through 1989, and continues to serve as Co-Chair of the NCAI Subcommittee on Human, Religious, and Cultural Concerns. Suzan’s career has spanned decades of involvement in Indigenous human rights issues and causes. Her traditional knowledge, extensive capacity for research regarding Indigenous cultures, and her indomitable spirit has led her to significant victories in non-Native arenas, including congressional and administrative venues. She is a founder of the National Museum of the American Indian and Guest Curator and General Editor of the exhibit and book, “Nation to Nation: Treaties Between the United States and American Indian Nations.” She has been a critical leader on the effort to eradicate derogatory Indian mascots. In November 2014 she was awarded the Medal of Freedom by President Obama – the nation’s highest civilian honor.

Public Sector Leadership Award
National Criminal Justice
The National Criminal Justice Association (NCJA) has been an integral partner dedicated to improving public safety in tribal communities. Since 2009, NCJA has partnered with the National Congress of American Indians on a Tribal-State Collaboration and Justice Capacity Building Project, which focuses on relationship building and promoting intergovernmental coordination of key tribal, federal, and state criminal justice stakeholders in Indian country. Under this project, NCJA has provided technical assistance to several tribal-state collaboration projects, as well as launched the Tribal Law and Order Resource Center website. This website contains a number of Tribal Law and Order Act (TLOA) and Violence Against Women Act (VAWA) implementation resources, including a free, ongoing webinar series.