Inuk A Film by Mike Magidson

The National Congress of American Indians encourages all to attend this special, free event. The Smithsonian is screening an incredible new film about Native peoples living in Greenland. Of the screening, NCAI President Brian Cladoosby said:

“I hope those in the Washington, DC area make every attempt to attend the screening of Inuk. It is an inspiring story of two Inuit men, each fighting their own struggles but finding strength and solace in their friendship. Inuk is also an honest depiction of the beauty, conflict, and persistence of Native cultures in modern-day life. It has never been more important to support the work of our Native peoples, especially when that work can bring a greater understanding of our culture.”

At the screening, meet Anne Andreassen, the founder of the Uummannaq Children’s Home, which is located 500 km north of the Arctic Circle and serves as the film’s home base. Music will be performed by some of the Home’s talented Greenland Inuit residents. Following the screening, participate in a panel where teens, curators, and film-makers will discuss themes from the film and the changing climate and lives of Arctic peoples.

More about the film, from Inuk-film.com:

One morning, after pulling the half-frozen boy out of an abandoned car, the social services decide to send Inuk North, to a children’s home on a tiny island in the middle of the arctic sea-ice. There, Inuk meets Ikuma, a local polar bear hunter, who has his own share of problems. Haunted by his troubled past, his extraordinary hunting skills are mysteriously disappearing.

The children’s home’s warm-hearted director, Aviaaja, asks Ikuma to take Inuk on his annual seal-hunting trip. She is certain that despite the risks of such a long and dangerous voyage, Inuk will learn that he has a valiant past and a hopeful future.

So, when Inuk, the city boy, joins Ikuma, the great hunter of the North, on the epic dogsled voyage, they face much more than the bitter cold and fragile sea-ice. The most difficult part of the journey is the one they must make within themselves…

Created as an original road-movie on the sea-ice, “Inuk” is both an authentic story of Greenland today, a country torn between tradition and modernity, and a universal story about the quest for identity, transmission and rebirth after the deepest of wounds.

The authenticity of the film was intensified by the exceptional performance of the nonprofessional Inuit actors: teenagers from a home for neglected Inuit children and local seal hunters. “Inuk,” [Director Mike] Magidson’s first feature-length narrative, is the fruit of a unique friendship with them. 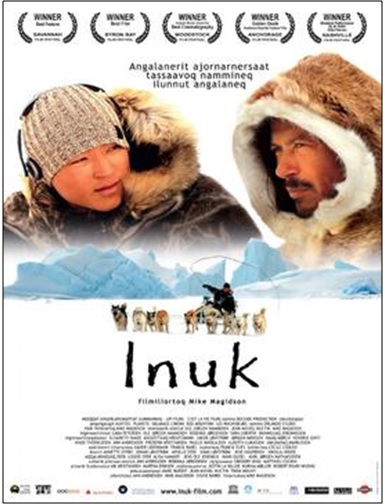