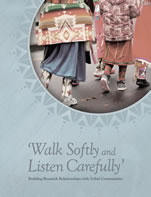 Produced with insights from those involved with tribal research in Montana and elsewhere.

Honoring the Trust Responsibility in the Federal Budget - September 18, 2012

Congress will soon debate how to avoid the "fiscal cliff," the term for a series of deadlines at the end of 2012 when tax cuts expire and automatic spending cuts – known as sequestration - will take effect. The Congressional Budget Office warned Congress that doing nothing could lead to another recession. Decision-makers should avoid any more harmful cuts to Indian programs which would threaten the health and welfare of Indian people. Under the Budget Control Act (BCA), most federal programs will face a destructive across-the-board cut of 8.2 percent in January 2013 if Congress fails to enact a plan before then to reduce the national debt by $1.2 trillion. As the nation faces critical choices about how to address the deficit while preventing another recession, tribal leaders urge decision-makers to sustain funding in ways that honor our trust, support our people, and strengthen America.

In the United States: A Pressing Need to Develop Tribal Economies- Regaining Sovereignty Over our Land

A Paper for the Conference and Consultation with the United Nations Special Rapporteur on the Rights of Indigenous Peoples, James Anaya

Comments to FCC on Lifeline and Link Up Reform

Background document on implications of 2012 oral arguments before the U.S. Supreme Court regarding the Affordable Care Act (ACA) and the permanent reauthorization of the Indian Health Care Improvement Act (IHCIA).

The U.S. Constitution and hundreds of treaties, federal laws, and court cases acknowledge that Indian tribes are sovereign governments. Despite this fact, Indian tribes are the only government in America without jurisdiction to combat certain types of domestic violence in their communities. S.1925, the Violence Against Women Reauthorization Act, addresses this jurisdictional gap with local solutions that will deliver long-overdue justice to Native women and safety to tribal communities.

On February 13, 2012 the President released a $3.80 trillion budget request to Congress, which is slightly more than the $3.79 trillion estimated for FY 2012. NCAI released a preliminary analysis of the President’s FY 2013 proposed budget as it impacts funding for Indian programs.

President Obama hosted the third annual Tribal Nations Conference on December 2, 2011. The Conference was attended by hundreds of tribal leaders representing the 565 federally recognized tribes. The meeting was preceded by four regional briefing and listening sessions with senior Administration officials hosted at the Eisenhower Executive Office Building on November 30 and December 1. The Conference itself was attended by six members of the President’s cabinet(Secretaries Donovan, Duncan, Salazar, Sebelius, Vilsack, and EPA Administrator Jackson), several members of Congress, and a range of senior Administration officials.

These notes were gathered by NCAI staff during the Tribal Leader Preparatory Meeting. The meeting was closed to press and the notes are in draft form. They are provided to assist tribal leaders as they prepare for the week’s critical nation-to-nation dialogue. They are not to be used for attribution in any press reports.