Please handcarry your form of payment with the onsite registration form or register online.

If you would like to volunteer for the 2019 Executive Council Winter Session please fill-out the volunteer form.

If you are unable to make a reservation at the host hotel and would like to be on the wait list, please fill-out the form with your information. For additional questions, please contact Amy Gay at agay@ncai.org.

Invest in the success of our conferences! Review and fill out the Sponsorship Form.

This event is open to attendees and there is no fee to attend. For inquiries contact Amy Gay at agay@ncai.org 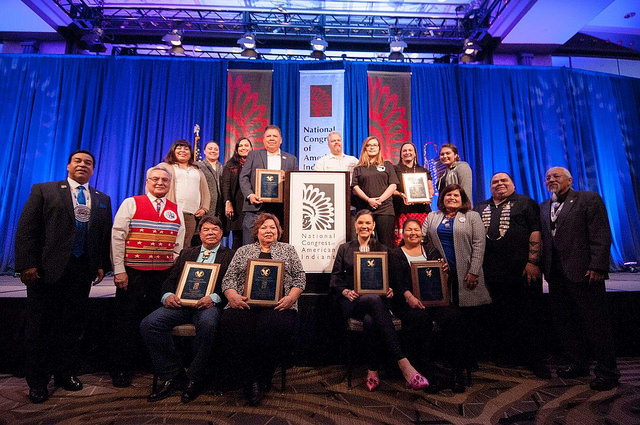 Directly following the State of Indian Nations, ECWS will begin Monday afternoon. Held at the Capital Hilton in Washington, D.C., the conference will tackle key issues facing Native American communities while providing tactical solutions primarily through legislative and policy planning with the Administration and Congress.

On-site press credentialing for ECWS takes place Monday, February 11, 2019 from 1:00 p.m. - 5:00 p.m. ET. Credentialed press have access to all plenary sessions, as well as those sessions noted for press access on the agenda.

Please note all press are required to wear press badges at all times and are asked to announce themselves to the moderator of each session they plan on attending.

You will receive a confirmation email after the deadline has passed if you will receive a credential to cover the event(s). All names submitted for credentials must be accurate and reflect the identification media presents at checkpoints for entrance. Press packets will be readily available at both State of Indian Nations and Executive Council Winter Session at the press table.

For assistance in scheduling a Hill Visit please contact Ashleigh Fixico at afixico@ncai.org.

Click here to view details regarding the 2019 State of Indians Nations address.

ICWA, from Framework to Practice