The foregoing FY 2014 tribal budget program requests (download at the bottom of the page) have been compiled in collaboration with tribal leaders, Native organizations, and tribal budget consultation bodies. Tribes respectfully request that these recommendations be included in the appropriations process. Download the document at the bottom of this page for in-depth, program specific recommendations for honoring the trust responsibility of the federal government to tribal nations and tribal citizens.

As the nation continues to debate the appropriate role and size of the federal government and how best to foster a stronger American economy, Indian Country remains committed to the work of rebuilding and shoring up tribal societies, bolstered with the tools of self-determination and self-government. Tribal governments exist to protect and preserve their unique cultures, identities, and natural environments for posterity. Overcoming poverty, while honoring tribal traditions and strengthening culture, is achievable but securing tribal economic security and prosperity will require a sustained commitment.

Respect for the responsibility of tribes as governments is essential for Native people to contribute their distinct American and tribal perspectives to future generations. Prosperity in Indian Country requires that tribal citizens are able to practice their cultural and religious traditions while enjoying economic opportunities—their families flourishing, with access to quality foods, housing, and financial security. Where tribes exercise self-determination, success stories abound and they all include the themes of improved responsiveness and increased accountability. The exercise of tribal control invokes the pride and fortitude of tribal people that can contribute to and sustain effective government administration.

The Congress and Administration have wrestled with how to reduce the federal deficit while avoiding damage to the economy. The most recent economic data available do not isolate the impact of the recession or recovery for Indian Country, but comparisons show economic disparities remain between Native people on reservations/trust land and the rest of the nation. And while tribal citizens have witnessed progress in addressing some of the most basic infrastructure disparities since 2000, the lack of basic housing, transportation, and broadband infrastructure continues to pose significant challenges for tribal health, safety, and economic security.

These FY 2014 Indian Country budget recommendations outline key areas where the federal government may assist tribal nations in providing resources to their citizens and developing new governmental and economic opportunities. This assistance and goodwill between nations derives from the trust relationship, and is engrained within Article I, Section 8, of the US Constitution. However, equally important to the trust relationship is a fundamental understanding that tribes are government entities, with all of the necessary tools to govern effectively and achieve government progress. As such, in addition to asking Congress and the Administration for the necessary funding to assist in providing services to tribal citizens, tribal nations also seek government parity in national tax reform discussions. Given that the Budget Control Act of 2011 (BCA) imposed severe caps over the next ten years on non-defense discretionary funding, tribes look to Congress to protect the trust, treaty, and statutory obligations to tribes funded in the federal budget. Until all tribes retain exclusive taxing jurisdiction within the exterior borders of their tribal lands, federal support remains critical to ensure essential government services are delivered to tribal people.

Many factors give cause for hope in Indian Country for creating economic security and prosperity, including the contributions tribes and Native-owned businesses contribute to local, state, and regional economies and the burgeoning population of Native youth. Tribal leaders urge Congress to uphold its solemn promises to tribes, even as policymakers continue working to reduce the deficit through spending reductions and revenue generation. The following FY 2014 tribal budget program requests have been compiled in collaboration with tribal leaders, Native organizations, and tribal budget consultation bodies. NCAI respectfully requests that these recommendations be included in the FY 2014 federal budget in order to honor the trust responsibility and support tribal economic security and prosperity. 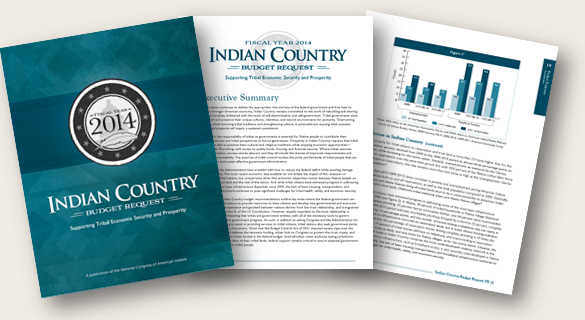