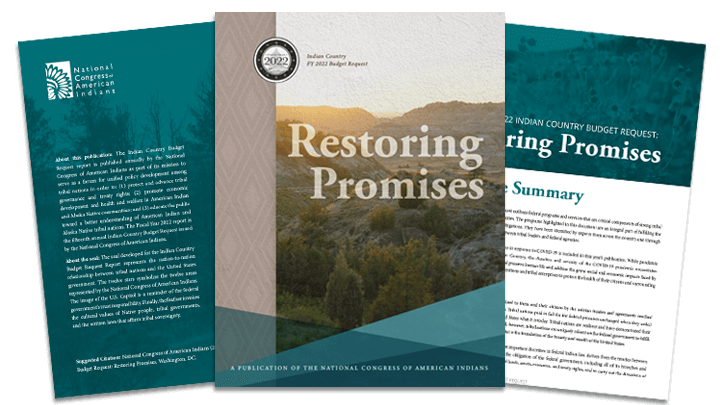 This Fiscal Year (FY) 2022 Budget Request outlines federal programs and services that are critical components of strong tribal governments, economies, and communities. The programs highlighted in this document are an integral part of fulfilling the federal government’s treaty and trust obligations. They have been identified by experts from across the country and through federal budget formulation processes between tribal leaders and federal agencies.

A section on supplemental appropriations in response to COVID-19 is included in this year’s publication. While pandemic response legislation has included Indian Country, the duration and severity of the COVID-19 pandemic necessitates significantly more resources to protect and preserve human life and address the grave social and economic impacts faced by tribal nations as they close government operations and tribal enterprises to protect the health of their citizens and surrounding communities.

The federal trust responsibility, one of the most important doctrines in federal Indian law, derives from the treaties between tribal nations and the U.S. government. It is the obligation of the federal government, including all of its branches and agencies, to protect tribal self-governance, tribal lands, assets, resources, and treaty rights, and to carry out the directions of federal statutes and court cases. The Supreme Court has defined this trust responsibility as a “moral obligation of the highest responsibility and trust” (Seminole Nation v. United States, 1942).

Funding this trust responsibility is critical to the fulfillment of the fiduciary relationship of the United States with tribal nations. This funding supports the express support of the United States for tribal self-determination and self-governance, which is critical to redressing the socio-economic disparities experienced by American Indians and Alaska Natives (AI/ ANs). In support of this collective goal, tribal nations call for the inclusion of the following recommendations in FY 2022 appropriations.