A Call to Honor the Promises
To Tribal Nations in the Federal Budget
April 19, 2013
National Congress of American Indians

As Congress and the Administration debate elements of various budget proposals for fiscal year (FY) 2014 and beyond, leaders of tribal nations call on decision-makers to ensure that the promises made to Indian Country are honored in the federal budget. Although the United States, businesses, and workers hoped that an economic recovery was finally taking off, the nation will begin absorbing automatic spending cuts known as sequestration in the next few months, creating an economic drag. The sequester cuts pose particular hardship for Indian Country and the surrounding communities who rely on tribes as employers, where the recession struck especially hard. Tribal leaders urge Congress to protect the federal funding that fulfills the trust responsibility to tribes in the face of difficult choices.

Opportunity to Make the Right Choices

In March 2013, Congress passed a continuing resolution for the remainder of FY 2013, avoiding a government shutdown but leaving in place deep sequestration cuts, including for tribal programs. The House and Senate have passed their respective budget resolutions for FY 2014, but the competing blueprints provide very different prospects for fulfillment of trust obligations. Upcoming negotiations provide an opportunity for Congress to honor the trust and treaty obligations in the federal budget. Congress will need to raise the debt ceiling in the next few months to prevent the United States from default and to avoid an economic crisis. Congress must also enact FY 2014 appropriations bills. Tribes urge Congress to end sequestration and make investments in programs that fund trust and treaty obligations, support tribal self-determination, and promote economic recovery in Indian Country.

Contracts Signed by Our Ancestors

The sequester reductions and other cuts to tribal programs undermine Indian treaty rights and obligations – treaties which were ratified under the Constitution and considered the “supreme law of the land.” The underpinning of federal spending in Indian Country is based in the treaties that tribes’ ancestors signed with the US government. At its most basic level, the economic success of the United States is built upon the land and natural resources that originally belonged to tribal nations. In exchange for land, the United States agreed to protect tribal treaty rights, lands, and resources, including provision of certain services for American Indian and Alaska Native tribes and villages, which is known as the federal Indian trust responsibility. Indiscriminate cuts sacrifice not only these trust obligations, it also thwarts the ability of tribes to promote economic growth, or plan for the future of Native children and coming generations.

Fulfillment of many of these duties and obligations resides in the discretionary portion of the federal budget, which will be impacted severely by the 2013 sequester and expected reductions due to the Budget Control Act caps. Already, law enforcement, education, health care, to name just a few, have been historically underfunded and have failed to meet the needs of tribal citizens. The US Commission on Civil Rights documented the disparate funding to Indian Country in its report, Quiet Crisis.

In their role as governments, tribes deliver all the range of services that other governments provide. Tribal governments maintain the power to determine their own governance structures and enforce laws through police departments and tribal courts. Tribes provide social programs, first-responder services, education, workforce development, and natural resource management. They also build and maintain a variety of infrastructure, including roads, bridges, housing, and public buildings. Yet, tribes need adequate resources to exercise their self-determination and serve as effective governments. Government funds provide much-needed investments in tribal physical, human, and environmental capital.

For many tribes, a majority of tribal governmental services is financed by federal sources. Tribes lack the tax base and lack parity in tax authority to raise revenue to deliver services. If federal funding is reduced sharply for state and local governments, they may choose between increasing their own taxes and spending for basic services or allowing their services and programs to take the financial hit. On the other hand, many tribes have limited ability to raise substantial new revenue, especially not rapidly enough to cover the reduction in services from the across the board reductions of the FY 2013 sequestration. 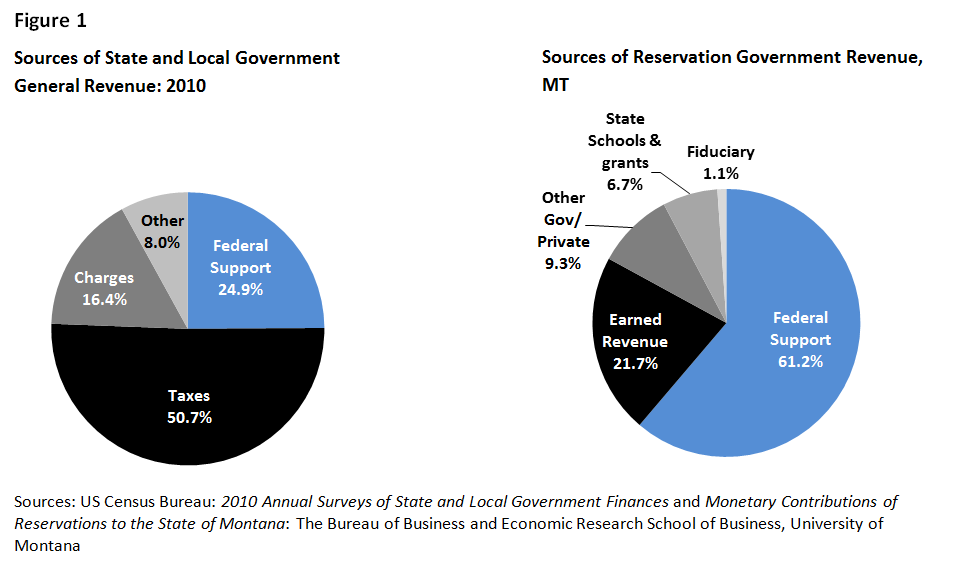 Not only will reductions to discretionary programs violate the trust obligations to tribes, but 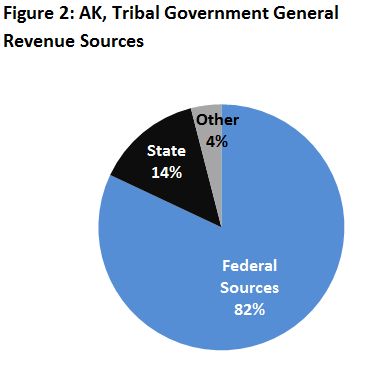 cuts will hurt the regional economies in which tribes are major players. A tribal government in Southeast Alaska, representing more than 27,000 tribal citizens, attracted between $25 million and $27 million in annual funding to the region to support 200 programs and services that enhance the lives and well-being of tribal citizens, families, and communities. These services affect employment, health, education, and cultural identity. The $22.5 million in direct expenditures generated an additional $9 million in indirect and induced economic activity, for an estimated total regional impact of $31.6 million. Reductions to Bureau of Indian Affairs, Head Start, as well as to Departments of Justice and Education will exact a heavy toll on the region’s economy.

In Oklahoma, 38 tribal nations have a $10.8 billion impact on the state every year, supporting an estimated 87,000 jobs, or five percent of all jobs in the state. Interrupting tribal revenue flow is likely to increase unemployment for the region. In Washington State, a recent economic analysis showed that, in total, $3.5 billion of the total gross state product can be attributed to the activity on American Indian reservations. Also, tribes paid $1.3 billion in payroll to more than 27,000 Washington residents, many of whom were non-Indian. Although some tribes have implemented strategies that enhance economic development for their communities to supplement federal sources, that does not supplant the federal government’s duty to fulfill its trust responsibility.

The sequester cuts pose particular hardship for Indian Country and the surrounding communities who rely on tribes as employers, where the recession has struck especially hard. 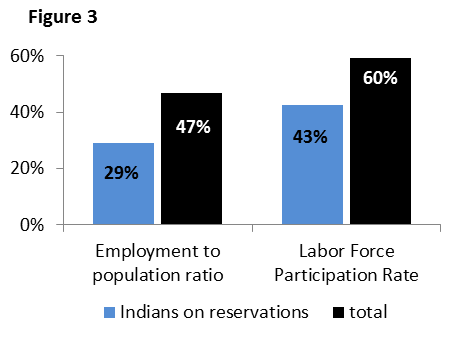 Census Bureau data show that each employed American Indian supported more than three others who were not employed. By contrast, the proportion for the entire US population is about one to one. Tribal leaders and planners have been working to address the economic inequity represented in the employment-to-population ratio.

The labor force participation rate—the proportion of able-bodied civilians of working age that are working—also shows much unmet potential for tribal citizens to enter into the economy. Four of 10 Indians receive a paycheck, versus nearly two-thirds of total population.

Sequester reductions in FY 2013 and beyond will likely affect employment in Indian Country more harshly. Figure 4 shows industry sector of people who are employed for the entire population compared to the Native population on reservations. A third of Native people are employed in education, health care, and social services delivery. Many of the health, education, and social services in Indian Country receive federal funds, including through the Indian Health Service, Bureau of Indian Education, Impact Aid and through the Bureau of Indian Affairs. 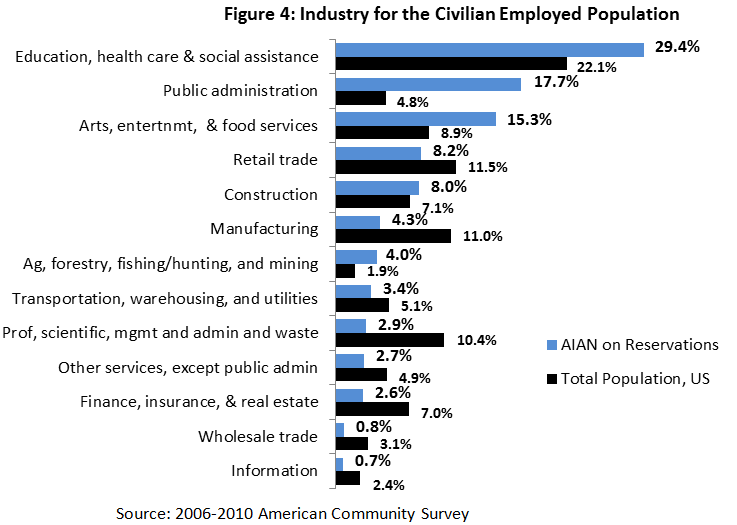 Federal dollars also help pay for education in Indian Country — a major function that makes up a basic building block of the economy. A majority of Native students attend public schools. During the 2010-11 school year, there were 378,000 AI/AN (alone) students in the U.S. public school system. During the same period, there were 49,152 students in Bureau of Indian Education Schools. 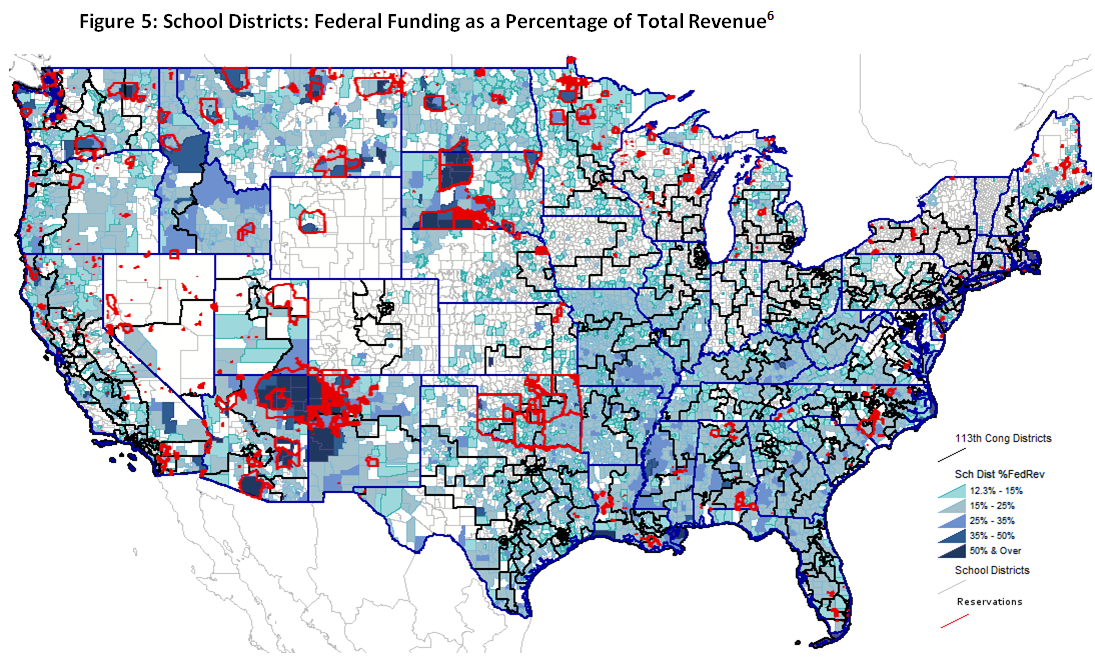 Across the nation, federal dollars represented 12.3 percent of school revenues in FY10, on average. In most school districts, education is funded largely by state and local governments, with the federal government contributing between 10 to 20 percent. However, schools on Indian reservations and military bases are on tax-exempt land. Unable to raise funds from taxes, Indian reservation and military schools depend more heavily on federal aid. In addition to funds for poor and disabled children, schools on federal land also receive Impact Aid, intended to make up for the lack of property-tax revenue.

Nearly the entire top 25 districts nationally who are most reliant on federal funding are on or adjacent to Indian reservations, which is largely due to the funding received through Impact Aid. Unlike other Department of Education programs, Impact Aid is not forward funded, meaning the funding cuts will take effect in the middle of the current 2012-2013 school year. The over $60 million in cuts to Impact Aid will directly affect the operation of 710 schools and the services provided to approximately 115,000 Native students.

Many of these schools are counting on those funds to meet the basic needs of students and to pay teacher salaries this spring, potentially forcing districts to make wrenching, mid-year adjustments. In New Mexico for example, the Gallup McKinley County Public Schools would lose about $2 million of the funds from Impact Aid, which could affect as many as 6,700 students who live on tribal lands. Impact Aid funds make up 35 percent of that district’s total budget.

Sequester reductions for FY 2013 in the Department of the Interior mean tribes would lose almost $130 million, impacting areas such as human services, law enforcement, schools, economic development, and natural resources. These reductions impact the core of tribal governmental services for tribal citizens.

In the Indian Health Service, sequestration is estimated to result in about 3,000 fewer inpatient admissions and 804,000 fewer outpatient visits provided in IHS and tribal hospitals and clinics. IHS may lack resources to pay for staffing and operations of five health care facilities that tribes have built with their own resources, with a total investment of almost $200 million. All other federal programs that serve the health of our nation’s populations with the highest need, such as Social Security, Medicare, Medicaid, the Children’s Health Insurance Program, and Veterans Administration, will be exempt from funding reductions. But not the Indian Health Service. IHS should be exempt as well.

Examining the trends in poverty rates on and off tribal lands is informative to the debate on how to address fiscal challenges. From 1990 to 2007, tribes reduced the percentage of tribal citizens in poverty on tribal lands by more than one-third. The poverty rate for all reservation American Indians and Alaska Natives (AIAN) in 1990 was 51 percent (see figure 6). That dropped to 39 percent in 2000, and was recently lowest at 33 percent in the 2008 Census American Community Survey (ACS) estimate. That has gone back up to 40 percent in the 2011 ACS 1-year estimate. The poverty rate for AIAN nationally, on and off reservation lands, was 20 percentage points lower in 1990 than the on-reservation rate, 10 percentage points lower in 2000, and 10 percentage points lower in 2010. So tribes dramatically lowered the gap between reservation and total AIAN poverty, but the recession halted the narrowing of the gap.

Tribes were reversing what were once considered insurmountable challenges, due to increased self-determination, but the recession undermined some of those gains. Tribes want to continue improving economic conditions so that young Native people will want to return to economies that provide work on their homelands.

The stakes are high for tribal governmental services and programs in the federal budget that support the trust responsibility, only some of which are highlighted here, and trust obligations should be protected from further reductions. Tribal programs, as part of the discretionary budget, have already done their part to reduce the deficit through the bipartisan Budget Control Act. Continued cuts will have severe consequences for every tribal citizen. Tribes urge the President and Congress to uphold the solemn promises of the trust responsibility throughout the federal budget in FY 2014 and future years.