This "Policy Update" was released at NCAI's 2016 Mid Year Conference in Spokane, Washington.

Analysis of Cities and Towns inside Reservations

This analysis includes the overall population, both Indian and non-Indian, living in towns/cities inside reservations, as well as square mileage. According to the Census data in these analyses, there are hundreds of towns and cities within the boundaries of reservations that are predominantly populated by non-Indians.

The House and Senate Appropriations committees filed a $1.15 trillion FY2016 omnibus spending bill early Wednesday morning. The bill (HR 2029, Consolidated Appropriations Act, 2016) rolls all twelve of the regular spending bills into one, providing updated funding and guidance to federal agencies through Sept. 30, 2016. The Interior-Environment bill funds the Bureau of Indian Affairs (BIA) and Indian Health Service (IHS), among other tribal programs. The Labor-Health and Human Services bill funds SAMHSA, Administration for Children and Families, and Department of Education. The links to explanatory statements for relevant divisions of the bill are below.

This NCAI FY 2016 Budget Request offers recommendations for ways the federal government, partnering with tribes, should meet the educational needs of Indian youth; provide adequate health care via the Indian Health Service, for both direct and self-governance tribes; ensure responsible resource development for the future; provide safe and secure tribal communities; and supply the long-term investments in tribal public infrastructure and services required to ensure every American Indian and Alaska Native enjoys a decent quality of life and has an opportunity to succeed. 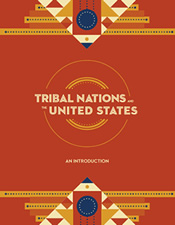 Tribal Nations and the United States: An Introduction

The guide "Tribal Nations and the United States: An Introduction" developed by the National Congress of American Indians seeks to provide a basic overview of the history and underlying principles of tribal governance. The guide also provides introductory information about tribal governments and American Indian and Alaska Native people today.

Transportation infrastructure development is critical to economic development, job creation, and improving living conditions for individuals and families in American Indian/Alaska Native communities, and the millions of Americans who travel through our reservations every day.

The report details a range of issues: the harm stereotypes have on Native Youth and the overwhelming support for ending harmful mascots by organizations, tribal governments, the NCAA, high schools, community groups, and individuals. The report also reviews in depth the well-documented legacy of racism in the Washington football team’s history, including factual rebuttals to the Washington football team’s false claims that NCAI leadership at one point endorsed the use of the “Redsk*ns” mascot.

Analysis of the Sequester: Betraying the Trust Responsibility and Slowing Tribal Progress

If Congress does not replace or avert the sequester scheduled for March 1, 2013, forced spending cuts will undermine the trust, treaty, and statutory obligations to tribal governments that are funded in the federal budget. Not only would it sacrifice the federal trust responsibility to tribes, but it would thwart tribes’ ability to promote economic growth or plan for the benefit of future generations. The Office of Management and Budget estimates the effective percentage reduction will be approximately nine percent for non-defense programs because the reduction will be implemented over the remaining seven months of the fiscal year (FY). 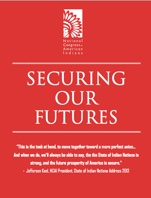 Released in conjunction with the 2013 State of Indian Nations, this report shows areas where tribes are exercising their sovereignty right now, diversifying their revenue base, and bringing economic success to their nations and surrounding communities. The path to securing our future – from education to food security, climate change to workforce development – is illuminated by the proven success of tribal nations. While the circumstances of each tribal nation are unique, the promising practices contained in the report offer a way forward to secure tribal economies and sustain prosperity for future generations.