Contrasting The First 18 Implementing Tribes on Right To Counsel

VAVA 2013 requires that tribes exercising SDVCJ ensure that SDVCJ defendants facing any term of imprisonment receive effective assistance of counsel at least equal to that guaranteed to them by the United States Constitution. The tribe is required to pay for licensed defense counsel for indigent offenders. Such counsel must be “licensed to practice law by any jurisdiction in the United States that applies appropriate professional licensing standards and effectively ensures the competence and professional responsibility of its licensed attorneys.” Pascua Yaqui, Tulalip, Eastern Band of Cherokee Indians, and Sault Ste. Marie also require that their defense counsel are members of the tribal court’s bar.

Some tribes were providing indigent counsel before they implemented VAWA 2013, particularly as indigent defense is also required by the TLOA for any defendant who is facing more than one year of imprisonment. Other tribes did not previously provide indigent defendants with counsel, or else used a team of lay advocates rather than licensed attorneys and therefore had to establish a new system or modify their existing system to meet this requirement of VAWA 2013. Some tribes hired a licensed attorney full time to serve as tribal public defender, while others contracted with outside attorneys to represent their defendants as needed. The volume of cases is not always an indicator of whether a tribe will hire a full time defense counsel or not. Fort Peck, Pascua Yaqui, Sisseton, EBCI, and Chitimacha have hired full-time tribal public defenders, while CTUIR, Tulalip, Muscogee, and Sac and Fox rely on contract arrangements with licensed attorneys.

Many tribes have gone above the minimum requirement of VAWA 2013 and provide counsel to more than just SDVCJ and TLOA enhanced sentencing defendants. Some tribes choose to provide counsel to all indigent defendants, while others provide all domestic violence offenders, or another subset of defendants, with counsel. The tribes also employ different standards to determine indigency, with some tribes providing counsel to anyone who asks for it. 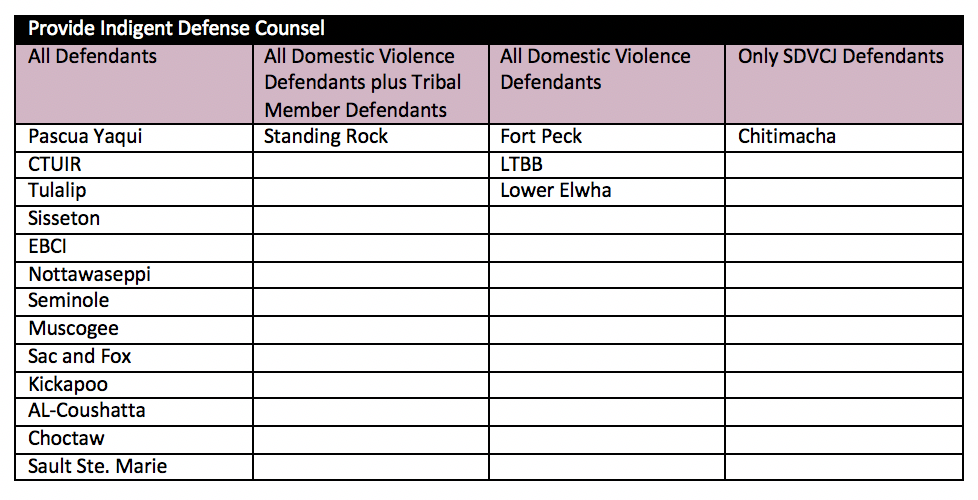 Pascua Yaqui: Presumed indigent if below 125% of federal poverty guidelines.

CTUIR: Indigence standard 150% of federal poverty guidelines, but in practice the tribe provides counsel to anyone who requests it, regardless of income.

Fort Peck: Presumed indigent if below 125% of federal poverty guidelines.

Tulalip: Presumed indigent if below 200% of federal poverty guidelines.

LTBB: The tribal judiciary is empowered to set standards for indigency in appointing counsel for defendants.

Nottawaseppi: The Court determines whether a defendant is indigent based on a notarized affidavit from the defendant confirming that he or she is indigent. The Tribal Court may require partial or full reimbursement of the costs of providing counsel.

Seminole: The presiding judge is empowered to appoint counsel upon a finding of indigence.

Muscogee: The Court determines whether a defendant is indigent pursuant to court rules setting standards for indigence.

Choctaw: The District Judge makes holistic determination of indigency based on defendant’s application—including a “Pauper’s Affidavit”—and other relevant information including, but not limited to: availability of personal or real property, debts, financial history, earning capacity and living expenses, credit standing in the community, family member’s ability and willingness to assist, and litigation expenses.

Tulalip: Defense services are primarily provided by the Tribal Court Public Defense Clinic at the University of Washington (UW) Native American Law Center. The clinic has handled over 3,000 cases in Tulalip Tribal Court since 2002 and now serves as the primary public defender for all criminal cases filed in Tribal Court. All clinic advocates must pass the Tulalip Court Bar Exam and be admitted to practice by the Tribal Court. In addition to the attorneys, selected second and third year UW law students who take the Tribal Clinic class provide assistance to clients by working on cases under direct and close Clinic supervision. The Clinic represents non-Indian defendants being prosecuted under SDVCJ; however, students do not participate in those cases. The Tribes also hire attorneys on contract when the Clinic is not available because of a conflict. Such attorneys must also be barred in the Tulalip Tribal Court.